Trip to Addis Ababa - the Trip, Impressions of the City

Alright then, time for a new post I guess :-)! My next trip to India is coming up next month, so I though it might be a good idea to post some earlier travel pictures here before they gather too much dust laying around completely lazy on my hard disk...

So, what happened recently? Shortly after New Year my close friend Marco was celebrating his daughter's baptism in Addis Abeba since this is where his wife's family is from. So obviously a perfect reason to visit not only a new city, but also a continent entirely unknown to me until that stage. (Well - no comments here please, I was well aware of the existence of this continent of course; but having been only to Tunisia before which might be geographically part of Africa, but by no means culturally, I really was quite the dumbass European at least when you look at first-hand experience of the continent.) A trip of 7 days, taking Turkish Airlines via Istanbul to Addis Abeba. To set the stage a very formal picture: The Semien Hotel where I stayed for a week. Nothing spectecular you might say; but after getting familiar with the hotel staff after a few days ('a cold St. George's beer like every night?') a place that actually felt very warm and welcoming. 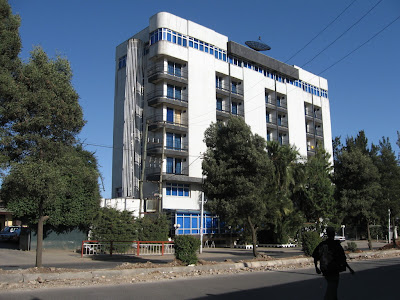 It's a very friendly atmosphere for a foreigner to come to Ethiopia - the country was never occupied by foreigners, so no grudges whatsoever against white people. (Okay, the Italians tried to colonize it but it failed quite quickly, so the funny thing left over is that you can still get terribly bad spaghetti and other pasta at lots of places in Addis Abeba even today.) One thing to learn though: The clock has a 6 hour offset - so what we call lunchtime, 12pm, is called 6 o'clock according to local time and the short hand of the clock really points downwards at that time. Takes a while to get used to - at the picture below it's actually 6am (European time) and we are having a good-night beer. We were simply convinced that it's just midnight so please don't blame us for it :-)! 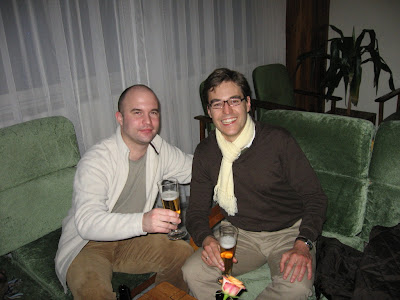 After not-sleeping a single minute breakfast at the house of Marco's wife followed - we actually wanted to have some nice sheep's head, but it seems Berta (or whatever his/her name was) had different plans: 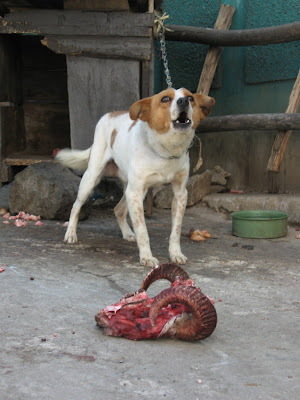 Everyone who knows me is aware that no trip for me is complete without meeting local academics, so in this case I visited Addis Abeba university, the oldest and most reputed university in Ethiopia. A welcome lunch by Professor Ariaya Hymete (to the left) was provided for me: 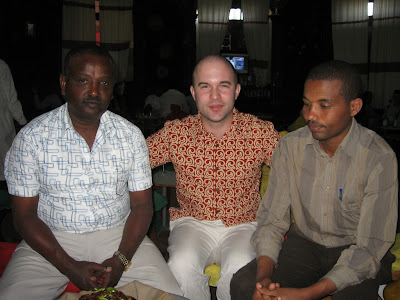 Well .. of course one has to sample local culture to the utmost extend - in particular in cases as appealing to a chemist as this one! In the test tube you see fermented honey, meant to be low in alcohol ... which quite obviously was not the case (in the background, St. George's Beer, quite a good brew and easy to drink also for the European/western palate). The typical bread ('injera') is shown on the table - to be eaten together with meat boiling in a small frying pan (looks like a stove) on your table. I have to say: The meat in Ethiopia was simply *fantastic*! In the days during my stay I really enjoyed just walking the street next to our hotel up and down - while I have been traveling a decent number of times in my life, I am actually still most curious about 'street life', the average person walking down the road during daytime, and maybe even more so at 3am when decent people should be in bed to sleep.

The road next to our hotel: 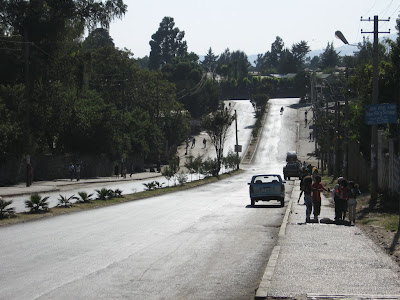 Little Santa, sleeping on his mother's chest. (It was also Orthodox Christmas at the time which might be related to the dress of the little chap.) 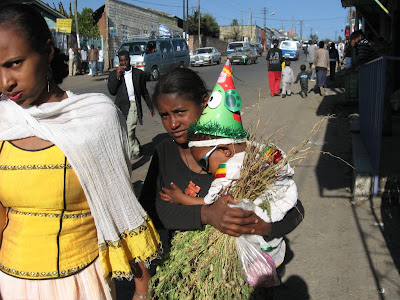 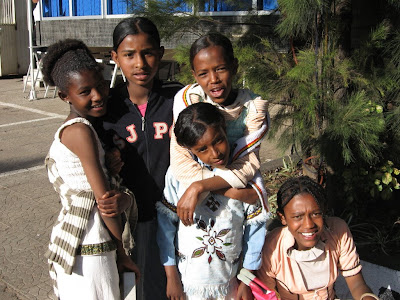 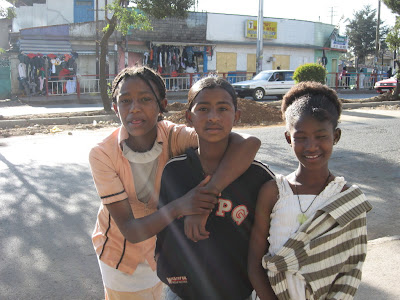 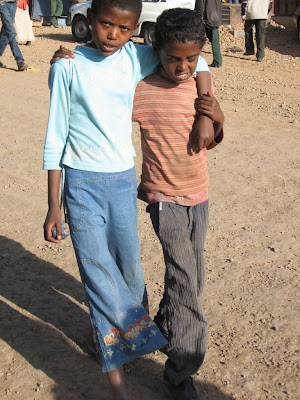 I noticed that, overall, Ethiopians don't like getting photographed as much as for example Indians. (However, that didn't prevent me from trying of course.) Indians even beg you to take pictures of them and are fascinated by the result (of course, also due to my incredible abilities as a photographer). In Ethiopia it's different, kids liked being photographed - but adults not so much. No, but to be honest: I sincerely apologize for the kind of intrusion of course, but I simply cannot leave a place without taking some impressions home with me as a memory. Pictures like the above may seem trivial to most, but they mean a lot to me since they are part of my memory, and even a quite one intense in places so different from my own.

As I said I was walking around town a lot, and even the streets adjacent to the hotel were so lively that I spend several hours a day there, day and night. (Difficult to capture in the photos though... I apologize!) In particular one street fascinated me - since the street at day, and the street at night, looked like completely different parts of the 'street universe'. It's the same street as above (different part though): 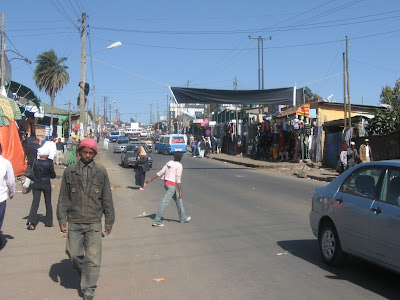 During daytime it looked like a regular shopping street - people selling chicken, food, clothes. At nighttime though a few dozen 'bars' switched on their neonlight - places that during daytime are virtually invisible since the food/shopping stalls catch all of your attention. At nighttime, the stalls are gone, the lights are coming up ... and this shop... 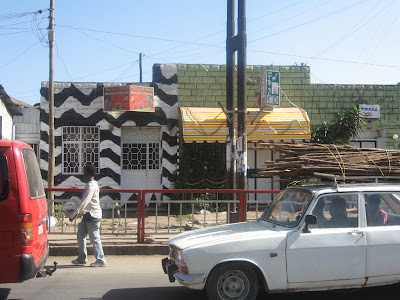 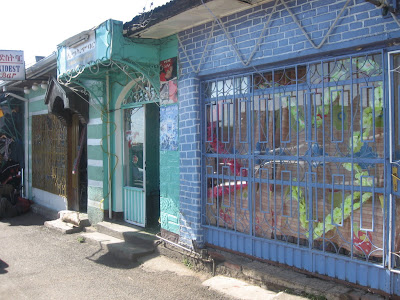 which are invisible at daytime are the source of reggae music and all the vices one can imagine. Fascinating street, really! At maybe 1am I went to a bar (not pictured, but looking virtually identical to the ones above) where only three locals were having beers - with live music though, one drummer and one person playing a string instrument. Two little girls, maybe 12 or 13, were dancing to the music in what must have been some traditional way. I ordered the ubiquitous St. George's for everyone in the room, listened to the music for an hour - I will certainly never forget that night. 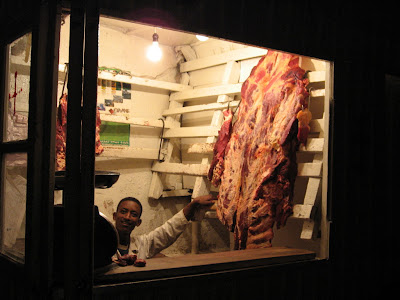 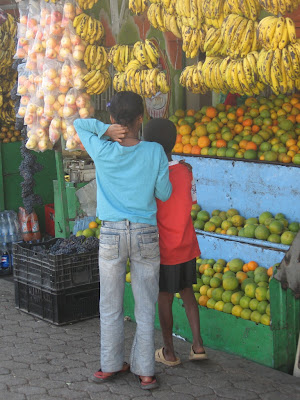